Corneal iontophoresis consists of the transfer of ionically charged molecules into the tissues to be treated, by means of a low-intensity electric field. Various drugs are hosted among these molecules. The transit speed of the ionic molecules can be increased by varying the electric current intensity or the characteristics of the preparation.

Therefore, by applying the electrode with the drug on the treatment area and the other at a maximum distance of about 10/20 cm, electric current will convey the drug into the tissues, since the ions of the drug will migrate toward the opposite pole until complete absorption has occurred.

For corneal iontophoresis treatment, a pair of electrodes connected to a direct current generator is applied to the patient.The main electrode (negative pole) is contained in a polycarbonate ring, specific for the medical industry, which is applied by suction on the cornea to be treated; the other electrode (+pole) is a “small plaster” (patch) fixed to the patient’s forehead. The current flow (at low intensity) between the two electrodes allows a specific formulation of riboflavin (RICROLIN®+), specially developed for iontophoretic administration, to quickly penetrate into the corneal stroma, through the intact epithelium (therefore without de-epithelialization), ensuring optimal impregnation. The flow of charge is possible thanks to the continuous current supplied by a power supply battery. The current intensity during iontophoresis is 1 mA. (5 minutes of treatment would correspond to a delivery dosage of 5 mA.minutes in total). The treatment interval is monitored automatically by timer software in the generator. At the end of the 5 minutes treatment period, the iontophoresis stops automatically. In ophthalmology, iontophoresis is a well-known and widely documented technique, it has been the subject of study and publications for several years. We can reference the research by Frucht-Pery et al. on transcorneal and transconjunctival administration of dexamethasone or the studies conducted in the US by the Eye-Gate company.

For corneal iontophoresis on humans, the current of 1 mA is completely harmless to the cornea and other sensitive structures of the eye. Experimental studies with application of riboflavin using iontophoresis have shown how this drug molecule penetrates animal corneas (in vivo) and human corneas (ex vivo). Penetration was measured both directly (measured through the determination of the concentration of riboflavin in the corneal stroma and aqueous humor), and indirectly (through the biomechanical evaluation of the increase in stromal rigidity after CXL).
In biomechanical studies, all corneas were treated, after moistening by iontophoresis, with ultraviolet rays (UV-A) at dosages of 3 mW/cm2 or 10 mW/cm2 in order to evaluate the effect of different radiation intensities on the structural strength of the corneal stroma.

CLINICAL RESULTS OF CORNEAL IONTOPHORESIS
The medium-term results (12-18 months) available in the scientific literature (Bikbova et al., Acta Ophthalmology; Vinciguerra et al., JRS; Mastropasqua et al., EUCORNEA and ESCRS Congress 2014) show that iontophoresis is an effective technique for the stabilization of progressive keratoconus (reduction of Kmax, no change of corneal thickness in the follow-up period) with a moderate inflammatory activation and no cases of haze in treated patients.

Studies have shown that, despite the concentration of riboflavin administered by iontophoresis being half of that employed in standard treatment, its diffusion is optimal over the entire cornea (Fig. 3) so that the effect of the CXL on stromal fibers is identical to that achieved with the EPI-OFF standard technique (Fig. 4).

The amount of riboflavin administered by iontophoresis is therefore sufficient for achieving efficient cross-linkage of the anterior two-thirds of the stroma, similar to that obtained with the EPI-OFF standard technique.

Concentration of riboflavin in human corneas
Mastropasqua et al., AJO 2014, have carried out a study of the kinetics of human corneas ex vivo to determine the concentration differences of riboflavin in the anterior, intermediate and rear stroma, after 3 different absorption procedures (30′ EPI-OFF with RICROLIN; 30′ Epi-oN with RICROLIN TE; 5′ Iontophoresis with RICROLIN+). Corneas, after impregnation, were divided into 3 slices by cutting with femtolaser (I: 0-150 microns; II: 151-300 microns; III: residual letto stromal, Fig. 5) and then analysed by HPLC. The results obtained (Fig. 6) are consistent incident with those obtained by Malecaze on animal models.

Is the amount of riboflavin administered with iontophoresis sufficient? Does the epithelium act as a screen?
The studies by Malecaze on animal models have been confirmed by an interesting experimental work conducted at the Bietti Foundation in Rome (Lombardo et al.). The study had the goal of analyzing the diffusion (scattering) of riboflavin before and after transepithelial CXL treatment with iontophoresis compared with standard CXL treatment.

Iontophoresis has been effective in distributing riboflavin in the corneal stroma through intact epithelium. After transepithelial illumination of the cornea with UV-A with a 10 mW/cm2 lamp, it was also shown that the amount of stromal riboflavin is more than adequate for effective corneal cross-linking (Fig. 8).

Does the technique ensure effective keratocytes apoptosis? Is it safe for the endothelium?
Studies undertaken at the Ophthalmology Clinic of the University of Florence (Mencucci et al.) on human corneas ex vivo, have shown how the treatment of CXL using corneal iontophoresis +UV-A radiation at 10 mW/cm2, determined an effective apoptosis of keratocytes in the corneal stroma for at least 250 microns, greater than that obtained with iontophoresis +UV-A radiation at 3 mW/cm2 (Fig. 10). The treated corneas did not show signs of fibrosis.
There was no evidence of endothelial damage and no alteration of nerve fibers. The study concluded that corneal iontophoresis applied to cross-linking can be considered an effective technique for improving the penetration of riboflavin into the corneal stroma and that the energy intensity of 10 mW/cm2 is safe for the irradiated tissue. 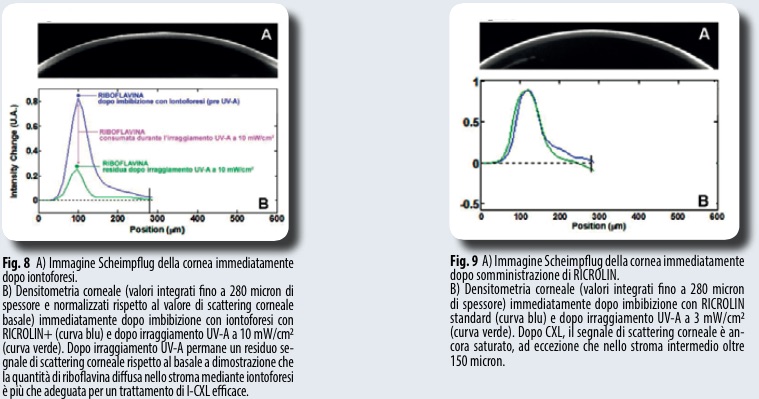 For more information: see these publications on corneal iontophoresis